Telegraph: Tory MPs must be free to choose In or Out 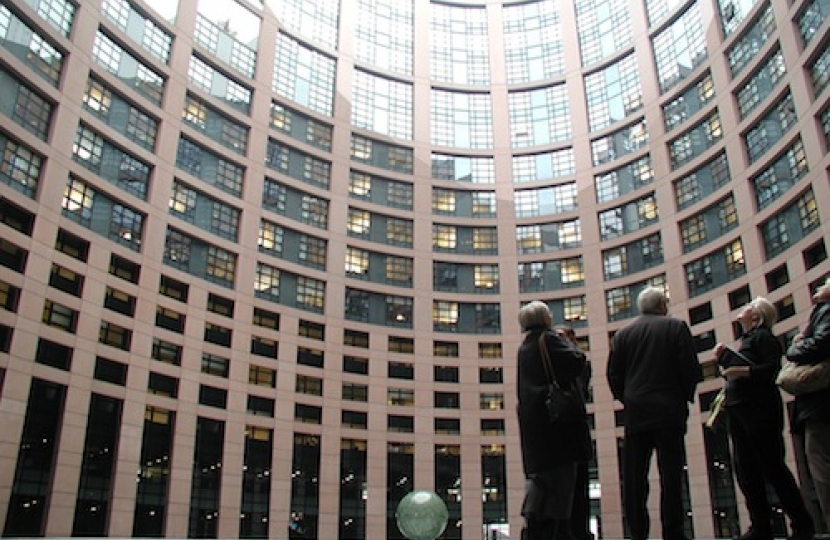 Yesterday the House of Commons voted in principle to recognise the right of the British people to decide our future relationship with the EU. In defeat, even Labour and the Liberal Democrats have come to their senses and recognised the democratic imperative that only the people can make such a fundamental decision about our democracy and self-determination.

I trust that the House of Lords, too, will recognise that in this question, the unelected chamber should exercise proper restraint. The vast majority of British people want to reduce the powers of the EU: all of us who want less cost and interference from Brussels should give credit to David Cameron both for his drive to renegotiate and for his determination to deliver this In or Out referendum.

Meanwhile, as we approach a national watershed of such significance – for this parliament and beyond 2020 – we all need to feel our way carefully, towards conducting the discussion in a way that builds trust and engages the electorate in a constructive debate. In a question of this magnitude there will be no hiding place for the nation’s politicians. We will be judged on the decisions that we take and the reasons that we advance – and on how we respond to the deeply held views of others.

I learnt this lesson years ago when I was shadow Europe minister, working with Michael Howard and then David Cameron. Every Commons debate to which I responded included speeches from a spectrum of colleagues, reaching from Bill Cash to Ken Clarke. The potential for offending one distinguished colleague or another was huge: criticising the judgment or the motives of colleagues who found that they couldn’t embrace the party’s goal of returning powers would have caused rancour and endless stories about division. Better instead to set a clear course but recognise, too, the deeply held beliefs of others who venture into the debate.

Of course, I only had to bridge differences of opinion between backbench colleagues – and in opposition. But the challenge of maintaining cohesion and mutual respect in the forthcoming EU referendum campaign is similar. Returned to government unhindered by another party for the first time in nearly 20 years, the Conservative Party in Parliament is in good heart. We know that a small Commons majority will bring its own difficulties – but the goodwill exists to seize this opportunity. In a Parliament that has become more independently minded, this determination to make things work is key. All party discipline is really self-discipline – and that means working with the grain of the party, not forcing people to adopt positions that we can’t defend.

This Government has much important work to do. Completing the task of restoring the public finances; reforming welfare; delivering the promised British Bill of Rights; rebalancing the United Kingdom. It is right, though, that David Cameron has given priority to the task of renegotiating our relationship with the EU.

We cannot know what the Prime Minister will secure in his whirlwind diplomatic tour of EU capitals. But at the end of that process, whatever powers are returned to UK control will be an improvement on where we are today. All supporters of reform can happily row in behind his efforts. Until the deal is done and the final package is revealed, it must be right that government members should be bound by the norms of collective responsibility. It must also be right to recognise that once the reforms are known, the referendum campaign will effectively begin.

At that point, there are three reasons why I would urge the Government to treat EU membership as a matter of conscience for front and backbenchers alike. First, making it clear now that this freedom will be allowed at the end of the negotiations will act as a pressure release and set the tone for a mature and rational debate. Secondly, while this is an issue that is more important than party politics – which will divide any serious party – it is also right that we should have a view to the need for reconciliation after the referendum.

It must be in the interests of the Conservative Party to treat the referendum campaign as a discrete issue, one that needn’t divide us on the vast majority of the Government’s programme for government on which we are entirely united. Thirdly, on such a totemic issue, it is only if it is clear that ministers are free to speak their minds that the public will know that they are genuinely urging a course of action that they believe in – not advancing an argument because it is a condition of their continued ministerial office.

The delivery of this referendum will be a massive achievement. Negotiating the return of powers to British control will be a victory for democracy, as will a final decision made by the people about our nation’s future. By having the confidence to engage in a fair, courteous and open debate we can ensure that the experience strengthens our public life for a generation to come.

Published in The Telegraph. You can read the original article here.